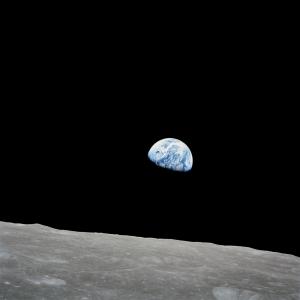 Earth rises above the Moon in this iconic image from Apollo 8, which entered lunar orbit on December 24, 1968. Astronauts Frank Borman, Jim Lovell, and Bill Anders orbited the Moon 10 times. On Christmas Eve, they staged a live television broadcast during which they read from the Book of Genesis. Apollo 8 blasted out of orbit later that night. [William Anders/NASA]

For 20 hours in December of 1968, three American astronauts watched the Moon pass outside their windows. Frank Borman, Jim Lovell, and Bill Anders were the first people to see the Moon from close range, as they orbited just 70 miles above the surface.

Their mission was to check out the Apollo mothership for future lunar-landing missions. But the crew of Apollo 8 also kept the world informed of its progress with several television broadcasts. On Christmas Eve night, the astronauts transmitted from lunar orbit, to what was then the largest television audience in history.

After the crew read the first verses from the Book of Genesis, Commander Borman closed with season’s greetings.

A few hours later, on Christmas morning, Apollo 8 fired its rocket engine to begin the trip home. As they emerged from behind the Moon with news of the successful firing, the astronauts were even jollier.