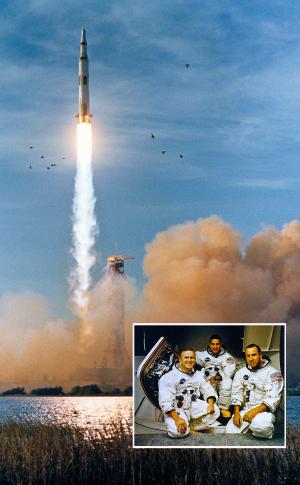 Headed for the Moon

Apollo 8 heads for the Moon on December 21, 1968, carrying astronauts Frank Borman, William Anders, and James Lovell (inset, l-r). It was the first manned mission to the Moon, in only the second crew-carrying Apollo flight. [NASA]

If you enjoy long nights under moonlight, then you’ll love the next couple of nights. That’s because it’s the time of the Long-Night Moon — the full Moon that’s in view longer than any other full Moon of the year.

And this long night of moonlight has a special appeal. Fifty years ago today, astronauts headed for the Moon for the first time. Frank Borman, Jim Lovell, and Bill Anders launched aboard Apollo 8:

The trio reached the Moon on Christmas Eve of 1968, and orbited until Christmas.

At the time of the flight, the Moon was a bare crescent. Now, though, it’s nice and full. That means it lines up opposite the Sun in our sky, so it does just the opposite of what the Sun does.

Since today is the winter solstice, it’s the shortest day of the year. So the Sun rises late, sets early, and scoots low across the sky during the short day.

The full Moon, on the other hand, rises around sunset, climbs high across the sky during the night, and sets around sunrise.

And as you watch the Moon, look for two bright stars close to it. Aldebaran stands to the upper right of the Moon in early evening, with Betelgeuse to the lower right. The stars add to the beauty of a long winter’s night.