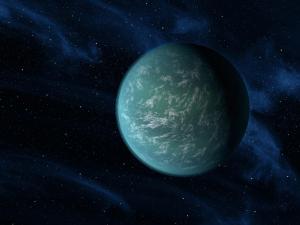 This artist's concept depicts Kepler-22b, a rocky planet that lies within the habitable zone of its parent star, which is similar to the Sun. The habitable zone is where temperatures are just right for liquid water to exist on a planet's surface, making it a more hospitable location for life. Although we can't yet see the surfaces of possible life-bearing planets, astronomers are developing techniques that would allow them to infer the presence of life. If this concept of Kepler-22b is correct, for example, they might detect the presence of water in its atmosphere and its blue-green color, which could be produced by chlorophyll-producing organisms. [NASA/ARC/JPL]

If a scientist on an alien world aims a telescope at Earth, it might pick up some interesting signals. The telescope might see the chemical signatures of oxygen, ozone, and methane, for example. And it might see a green color that’s missing on most planets. From those observations, the scientist might reach a startling conclusion: life inhabits this small, rocky world.

Scientists here on Earth are starting to look for similar signs of life on some of the thousands of planets discovered in other star systems. In particular, they look for a planet to pass in front of its parent star. If the planet has an atmosphere, some of the star’s light filters through it. That adds the “fingerprints” of chemicals in the atmosphere to the light from the star itself.

Some of those chemicals could be produced by life. On Earth, for example, plants “exhale” oxygen. In the upper atmosphere, some of the oxygen is converted to ozone. And cattle and other animals produce methane.

Detecting those chemicals is no guarantee that a planet is inhabited, though. Scientists must take many factors into account — the size and mass of the planet, its distance from its star, the radiation it receives from the star, and many others.

The observations are tough to make with current technology. But future space telescopes, as well as giant telescopes on the ground, should make it easier to look for signs of life among the stars. More about that tomorrow.