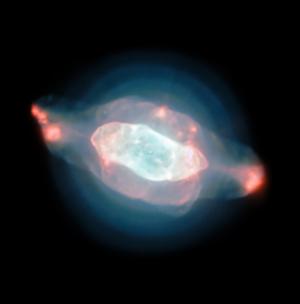 Multiple bubbles of gas encircle a dying star, forming the Saturn Nebula. An inner bubble is expanding faster than an outer one, forming shockwaves as the two layers ram together. Jets of gas shoot away from the poles of the central star (aiming left and right in this image). The nebula was named for the planet Saturn because, seen by eye through a small telescope, its outline resembles that of the ringed planet. [ESO/J. Walsh]

Saturn is disappearing from view. It’s quite low in the southwest as night begins to fall, so even though it’s pretty bright, you need a clear horizon to spot it.

But an object that’s named for Saturn is still in good view. The Saturn nebula stands about half way between Saturn and the brighter planet Mars, which is in the south. The nebula is above Capricornus, in a remote corner of Aquarius.

Through binoculars, the nebula looks like a fuzzy green star. A small telescope reveals an outline that resembles the planet Saturn — hence the nebula’s name.

The Saturn nebula is the final gasp of a star. As the star neared the end of its life, it puffed up to giant proportions. Changes in its core caused those layers of gas to puff out into space. Today, they continue to expand. They form a colorful and complicated bubble around the star’s core.

The bubble consists of a couple of shells of gas and dust. The inner shell is catching up to the outer one, creating shockwaves. Jets of gas shoot out from the poles of the star’s core. They punch through the bubbles, and form dense clumps as they ram into the material around the dying star.

Over tens of thousands of years, the bubble will grow thinner and thinner. And the star’s core, which produces the energy that causes the nebula to shine, will get cooler and fainter. So the Saturn Nebula will disappear, and only the dead core will remain — a tiny cosmic ember known as a white dwarf.