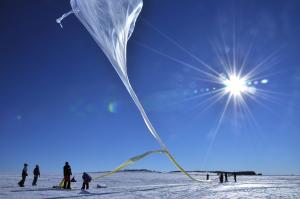 Scientists and technicians are preparing to launch three research balloons from Antarctica over the next few weeks. Climate conditions over the continent form a vortex that allows the instrument-carrying balloons to circle around Antarctica for weeks at a time, then drop down on the ice for recovery. The research balloons will study X-rays from space, cosmic rays, and other phenomena. This photo shows launch preparations from a previous year. [NASA]

It’s looking like a busy summer in Antarctica. NASA plans to launch several giant balloons from the continent to study the universe.

The launch window for these missions opens in early December, when the weather generally becomes calm and clear.

Air currents form a vortex around Antarctica. A balloon launched into that vortex circles the continent. When the mission is done, its payload parachutes onto the ice.

Mother Nature doesn’t always cooperate, though. Last year, the only planned mission had to be abandoned after 16 launch attempts were wiped out by bad weather. The payload was left in Antarctica for another go this year.

That payload is known as SuperTiger. Its mission is to catch and analyze the heaviest cosmic rays — the nuclei of heavy atoms blasted into space by supernovae. Studying these elements can help astronomers understand what happens inside the exploding stars.

A mission known as X-Calibur will look at the X-rays produced by black holes and neutron stars — the corpses of supernovae. The observations should reveal details about how black holes gobble up material from companion stars.

And a third mission, known as Barrel, will study space weather. In particular, it’ll look at how energetic particles spiral toward the surface from Earth’s radiation belts.