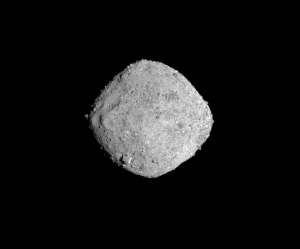 Just days after InSight successfully landed on Mars, another solar system mission is nearing its destination as well. OSIRIS-REx is closing in on Bennu, an asteroid that's about a third of a mile in diameter. The craft this snapped this image of the asteroid on November 16, from a range of about 85 miles. OSIRIS-REx will move even closer to the asteroid over the next few days, with its official "arrival" scheduled for December 3. In 2020, the craft will touch down on the asteroid and scoop up a sample of surface material for return to Earth. [NASA/GSFC/Univ. Arizona]

An American spacecraft is inching its way toward an asteroid. It’ll arrive on Monday, beginning an encounter that will continue for more than two years.

OSIRIS-REx will rendezvous with Bennu, an asteroid that’s about a third of a mile in diameter. Its a type of asteroid that probably hasn’t changed much since its formation. And it contains a lot of water and carbon, suggesting it also contains organic compounds — the basic building blocks of life. So Bennu could teach scientists about the materials and processes that give birth to planets — and perhaps about those that gave rise to life on Earth.

During its first month of operations, OSIRIS-REx will make several close passes by Bennu’s poles and equator. That will provide precise measurements of the asteroid’s mass and shape. After that, the craft will settle into orbit, beginning a long series of observations.

The mission’s highlight will come in July of 2020, when OSIRIS-REx is scheduled to scoop up a small sample from the surface. It’ll bring the sample to Earth three years later.

One of the reasons Bennu was selected is that it occasionally passes quite close to Earth, making it a relatively easy target. And there’s a small chance Bennu could actually hit Earth in the late 22nd century. So learning about its composition and structure could help future generations decide how to deflect this dangerous neighbor.

Tomorrow: a small “twin” for a famous star cluster.