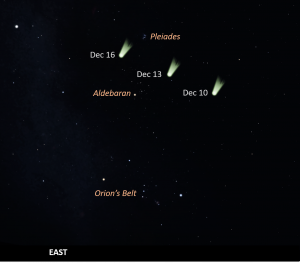 Comet Wirtanen will sweep across the constellation Taurus in December. At its brightest, around mid-month, it could be bright enough to see with the unaided eye, but only from a dark skywatching site. Even then, it is likely to appear as no more than an indistinct smudge of light, so it will be tough to pick out. The comet will pass just 7.1 million miles (11.5 million km) from Earth on December 16, one of the 10 closest comet approaches ever recorded. The comet is spewing a lot of gas and dust into space, increasing its brightness. It is quite small, though, which is why it won't make more of a spectacle of itself. This chart shows Wirtanen's position in the sky, although the symbol for the comet is highly exaggerated in both size and brightness.

A hyperactive comet is racing toward an especially close encounter with Earth next month. It’ll sweep past the beautiful Pleiades star cluster, and should be visible through binoculars. And one prediction says it could be bright enough to see with the unaided eye.

Comet 46/P Wirtanen isn’t all that big — less than a mile in diameter. But it’s described as “hyperactive.” That means it releases more gas and dust — especially water vapor — than expected for a comet of its size. The extra material makes it look brighter.

The comet orbits the Sun once every five and a half years. That wasn’t always the case, though. When it was discovered, in 1948, each orbit took more than a year longer. But close approaches to the planet Jupiter altered its orbit. They pushed the comet’s closest point to the Sun to just outside Earth’s orbit.

Wirtanen will pass closest to the Sun on December 12th, and to Earth just four days later. It’ll miss our planet by about seven million miles. That’s one of the closest approaches by any comet since 1950.

One comet expert estimates that it will reach naked-eye brightness. But others say it’ll remain too faint to see without some help. Either way, astronomers are keeping a close eye on this close comet.

They’re also keeping a close eye on an asteroid — not because it’s close to Earth, but because a spacecraft is closing in on it. More about that tomorrow.