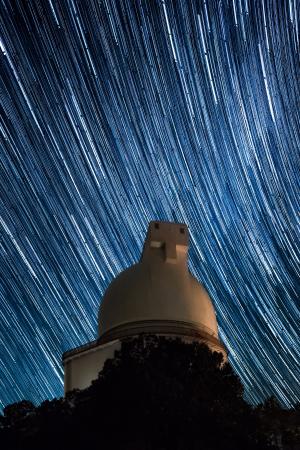 Stars trail behind the dome of the Harlan J. Smith Telescope at McDonald Observatory. The dome and its 107-inch telescope were dedicated during a winter storm on November 26, 1968. [Ethan Tweedie Photography]

Heavy snow was falling over the Davis Mountains of West Texas. But the raw weather could do little to dampen the spirits of astronomers and visitors from across the country. Fifty years ago today, they dedicated McDonald Observatory’s 107-inch telescope. At the time, it was the third-largest telescope in the world.

The Observatory had started the quest to build a new telescope five years earlier. The University of Texas was looking to upgrade its astronomy program. It hired Harlan J. Smith to run the observatory and the new astronomy department.

One of Smith’s first goals was to build a big new telescope. And in a case of “timing is everything,” NASA needed help from telescopes on the ground to support its missions to the Moon and planets. So the space agency paid for the telescope and its instruments, while Texas paid for the dome to house it.

The telescope’s main mirror is almost nine feet across. It was made using a relatively new technique: Chunks of silica were melted together to produce a mirror that was stronger and tougher than conventional mirrors, and that didn’t “flex” as much under changing temperatures.

The telescope began its observations in 1969. Later, it was named for Harlan Smith. Today, the telescope remains as busy as ever, both as a research instrument and as a teaching tool for students. It could continue to produce world-class results — and astronomers — for many years to come.