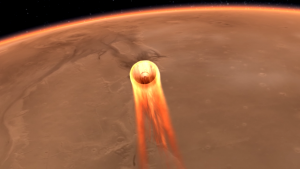 The InSight lander blazes through the Martian atmosphere in this artist's concept. The craft is scheduled to touch down on November 26. Its entry and landing involve several crucial steps, including deploying a parachute and firing its braking engines. Several missions have failed on final approach to the Red Planet. [NASA/JPL]

The InSight spacecraft will take the most thrilling ride in the solar system tomorrow. It’ll hit the Martian atmosphere at about 14,000 miles per hour. And if everything works the way it’s supposed to, it’ll gently touch down on the surface just six minutes later.

InSight is scheduled to land on a smooth, featureless plain. It has cameras to view the landscape, and instruments to monitor the weather.

Its main mission, though, is to study the Martian interior. It’ll use a seismometer to record “marsquakes,” and a heat probe to measure temperatures below the surface. Those observations should tell us more about how Mars is put together.

To accomplish that goal, InSight first has to survive its tricky entry and landing.

The craft is sealed inside a capsule with a heat shield on its bottom. The shield will protect InSight from the fiery plunge through the atmosphere, and slow the craft down. When the shield’s work is done, it’ll fall away, and InSight will deploy a parachute and extend its landing legs. Next, the parachute and capsule will be jettisoned, and 12 small rocket engines will lower InSight to a gentle touchdown.

That sequence is scheduled to be monitored by a pair of cubesats — spacecraft that are about the size of a thick old-fashioned phone book. They’ll relay transmissions from the lander to Earth. After that, they’ll fly past Mars — leaving InSight to start studying the interior of the Red Planet. 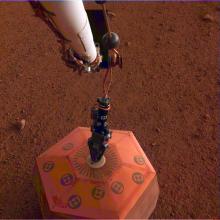