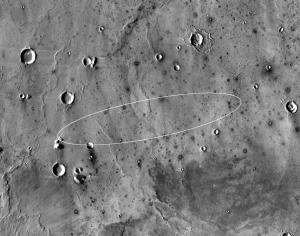 An image snapped from Mars orbit shows the landing site of InSight, a mission scheduled for touchdown on November 26. Known as Elysium Planitia, the site is smooth and flat, with no mountains or other major features and few boulders. The mission is designed to probe the Martian interior, so it needs a safe landing spot near the equator, where its solar arrays can receive abundant sunshine throughout the year. [NASA]

Mars has some of the most spectacular scenery in the solar system. But the next Mars lander won’t see any of it. Instead, it’s scheduled to touch down in a wide, featureless plain near the equator.

That’s because the main mission for InSight, which will land on Monday, is to look deep into Mars. In fact, it’ll be the first Mars lander designed to the study the planet’s interior. For that, scientists simply want a landing site that’s safe and worry free.

Current models say Mars consists of the same layers as Earth: a core, a mantle, and a crust. The core is about 2200 miles wide — about half of the planet’s diameter. Like Earth’s core, it’s made mainly of nickle and iron. But unlike Earth’s core, it probably also has a lot of lighter elements — mainly sulfur.

The mantle once provided the molten rock that built the planet’s volcanoes. But the volcanoes all appear to be extinct or dormant, so the mantle may be more solid than Earth’s mantle. And it’s topped by a crust that averages about 30 miles thick.

InSight will use a pair of instruments to refine that model. One is a seismometer. It’ll listen for “marsquakes” and the impacts of space rocks. The way the shockwaves from these events travel through Mars can reveal its interior structure.

The other instrument is a heat probe that will drill down a dozen feet or so. It’ll measure the planet’s interior temperature — giving us a better look inside Mars.