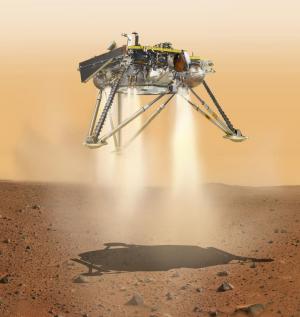 InSight, the latest Mars lander, fires its braking engines as it descends toward the planet's surface in this artist's concept. InSight is scheduled to land on November 26. If all goes well, it will deploy instruments to listen for marsquakes and measure the planet's interior heat. The observations should provide a better picture of Mars' structure and history. [NASA/JPL]

Getting to Mars isn’t easy. In fact, about a quarter of all American missions to the Red Planet have failed. Two of them perished on launch. The other three made it to Mars, but failed during their arrival.

In 1993, for example, Mars Observer switched off its transmitter as it prepared to enter orbit just three days later. It was never heard from again. Its propellant tanks probably exploded when they were pressurized for the engine firing that would have placed the billion-dollar mission in orbit.

Six years later, Mars Climate Orbiter made it even closer to Mars before it failed. In fact, it passed too close to the planet. A math error caused it to plunge too deep into the outer atmosphere. The pressure ripped the craft apart.

And just a couple of months after that, Mars Polar Lander failed just seconds away from touchdown. Its computer thought the craft had already made contact, so it shut down the engines at an altitude of less than 150 feet. The lander crashed just moments later.

The last eight Mars missions have all made it safely. And NASA is hoping to make it nine in a row on Monday, when InSight is scheduled to touch down on Elysium Planitia. Because of some unique challenges, it will use a heavier heat shield than earlier missions, and a tougher parachute. If everything works as planned, InSight will spend a full Mars year studying the interior of a planet that’s hard to reach.