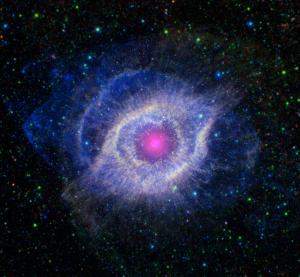 This false-color image shows the Helix Nebula, which is the last gasp of a dying star. The nuclear reactions in the star's core are shutting down and the star is expelling its outer layers into space. They form a barrel, and we're looking "down" into the barrel. This combined infrared and ultraviolet image shows several shells of gas that have been expelled at different times. Dense knots of material form streaks that are pointing toward the center of the nebula. The streaks actually aim away from the center as radiation from the dying star erodes the knots. The pink glow in the center is especially hot gas that has been warmed by the star's core. [NASA/JPL/Caltech]

When a Sun-like star dies, it stages its own wake — a bright, colorful display that can last for tens of thousands of years.

A star that’s in the middle of that end-of-life display is in Aquarius, which is in the south at nightfall. The star has created the Helix Nebula, a double ring that looks like a giant eye. It’s been going for more than 10,000 years.

The star that created the Helix originally was a little bigger and more massive than the Sun. When it consumed all the nuclear fuel in its core, the nuclear reactions in the core shut down. The star then blew its outer layers of gas into space, creating the nebula. Radiation from the exposed core causes the nebula’s gas to glow.

The Helix is actually shaped like a barrel that’s tilted a bit, and we’re looking down through the center of it. So one of the two rings we see is the top of the barrel, while the other is the bottom.

The barrel spans two or three light-years. And its “wall” contains thousands of dense knots of dust. They’re being eroded by energy from the star’s core, so they look like long tadpoles, with the tails facing outward.

The core soon will settle down into its final phase of life: a hot but faint white dwarf, shining feebly into the cosmic night.

The Helix is visible through binoculars or a telescope. Look for it about half way between the orange planet Mars, which is in the south at nightfall, and the bright star Fomalhaut, to the lower left of Mars.