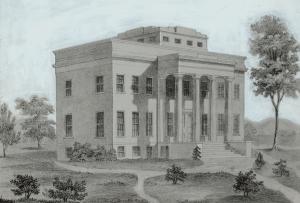 Shortly after John Quincy Adams became president, in 1825, he asked Congress to build a “lighthouse of the skies” — a national astronomical observatory. Congress rejected the idea. But Adams didn’t lose his enthusiasm for astronomy. In fact, his last public speech came 175 years ago today, at the founding of the Cincinnati Observatory — the first major public observatory in the United States.

The observatory was the handiwork of Ormsby MacKnight Mitchel, a teacher and astronomer. He raised thousands of dollars to buy the third-largest telescope in the world.

By late 1843, he had enough money and pledges to lay the cornerstone, atop 500-foot Mount Ida.

Adams was 77 years old then, living in Massachusetts. He spent days traveling by rail, boat, and stage coach. Adams spoke on November 9th, 1843. Before a large crowd, he talked for more than an hour, extolling the virtues of science and of the new observatory. To honor the ex-president, Cincinnati renamed the hill Mount Adams — the name it still holds today.

The building was completed, and the new telescope was delivered from Germany, in 1845. The observatory operated there for three decades. By the mid-1870s, though, the smoke from chimneys and coal-burning industry had blotted out the stars. So the cbservatory moved to a new site, farther from town. And it’s still there — 175 years after its illustrious founding.