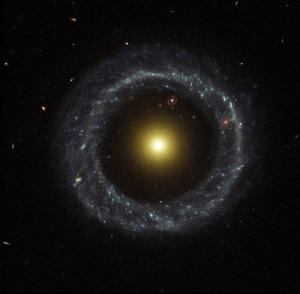 This Hubble Space Telescope image shows what could be the result of a celestial bullseye. Hoag's Object is a ring galaxy. It has a dense knot of fairly old, reddish stars in its middle, encircled by a ring of younger, hotter, bluer stars. The galaxy originally might have been a spiral. Long ago, though, another galaxy might have punched through its middle, stirring up the stars and creating the ring pattern. One problem with this idea, however, is that astronomers have not found a second galaxy that could have been the "bullet" that punched through Hoag's Object. [NASA/Hubble Heritage Team (STScI/AURA)]

Galaxies frequently collide with each other. And the results can be spectacular. The encounters can pull out great streamers of stars, making the galaxies look like tadpoles. They can trigger intense bouts of starbirth. And they can scramble a galaxy’s stars and gas clouds, creating beautiful rings that look like cosmic bulls-eyes.

One well-known example is the Cartwheel galaxy. It’s in the constellation Sculptor, which is low in the south on November evenings.

The Cartwheel spans about 150,000 light-years — a bit bigger than the Milky Way. It has a bright ring of older, redder stars in its middle, with a brighter ring of younger, bluer stars outside it. Wispy spiral arms connect the rings.

The Cartwheel probably was a normal spiral galaxy until a smaller galaxy plunged through it. The collision created a wave that rippled outward, like a rock thrown into a still pond. The wave disrupted the galaxy’s spiral structure. It also squeezed clouds of gas and dust, causing them to give birth to new stars.

Another well-known ring galaxy is Hoag’s galaxy. It has a yellow ball of stars in its middle, with a bright ring of blue stars around it. There’s not much between them, though — no spiral arms to link them. Astronomers aren’t sure if Hoag’s galaxy gained its structure from a collision or some other mechanism. All we know for sure is that it’s a beautiful cosmic bulls-eye, spinning through the universe.