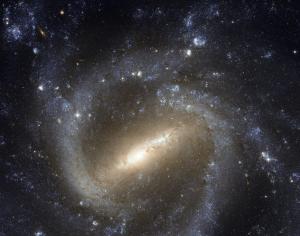 Step Up to the Bar

A long bar of stars highlights NGC 1073, a galaxy about 55 million light-years away in the constellation Cetus. The galaxy spans about 80,000 light-years, which is a bit smaller than our home galaxy, the Milky Way. Bars are found in the centers of many spiral galaxies, including the Milky Way. [ESA/NASA]

The Milky Way bar is more than just candy. It’s a key part of our home galaxy. That’s because the Milky Way is a barred spiral. Its beautiful spiral arms extend from the ends of a thick bar of stars that spans the galaxy’s middle.

And the Milky Way isn’t alone. In today’s universe, up to two-thirds of all spiral galaxies appear to have bars.

Simulations reveal that bars should be a natural development for spiral galaxies. Gravitational disturbances can cause stars in a spiral to follow elongated orbits around the galaxy’s center. That “stretches out” the center, forming the bar.

Gas can be funneled into the bar, where it can give birth to new stars. But most of the stars in a bar are old and faint, so the bar looks yellow. The spiral arms that wrap off its ends, on the other hand, contain a lot of young, vigorous stars, so the arms look bright blue.

That includes the Milky Way. Because we’re inside the galaxy, we can’t easily see its overall structure. So the bar was discovered only recently. And there’s still some uncertainty about its size. But it certainly extends across many thousands of light-years — a sweet collection of stars in the heart of the Milky Way.