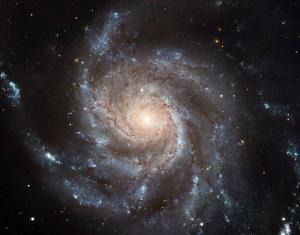 Messier 101 is one of the most beautiful of all spiral galaxies. It consists of a bright core that contains mainly older, redder stars, enwrapped in brilliant spiral arms populated by many younger, bluer stars. Dark dust lanes, which contain the raw ingredients for new stars, outline the spiral arms. The galaxy is in Ursa Major, the great bear, which contains the stars of the Big Dipper. [NASA/ESA]

Few sights in the universe can beat a spiral galaxy. Beautiful streamers wrap around a dense core, creating a whirlpool or a pinwheel. Such a galaxy can span a hundred thousand light-years or more, and contain hundreds of billions of stars. And we live in a spiral galaxy — the Milky Way.

The spiral arms that define such a galaxy are a bit of an illusion, though. There are plenty of stars in the gaps between the arms. Such stars are older and fainter than those in the spiral arms, though, so they’re not as impressive.

Most spirals actually form disks that are roughly 10 times wider than they are thick. The spiral arms are regions where material has piled up, like a traffic jam on a highway. Individual cars move through the jam, but the pile-up remains.

In the case of a galaxy, stars and clouds of gas and dust move into the wave, which moves slower than the galaxy’s overall rotation. Material is denser in the wave, which causes the clouds of gas and dust to collapse and give birth to new stars. Many of these stars are hot, bright, and blue. It’s these stars that make the spiral arms so prominent.

Such stars burn out quickly, though. So as they move through the wave, they fade from view. That leaves the regions that flank a spiral arm looking dark and empty.

Spirals come in many varieties. In some, the central “bulge” forms a long bar. More about that tomorrow.