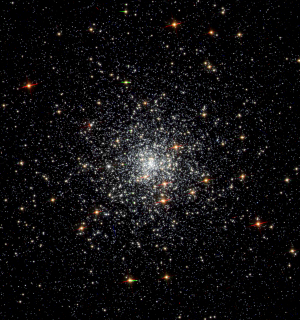 Home to a Black Hole?

Hubble Space Telescope snapped this image of NGC 6624, a globular star cluster in Sagittarius. Observations over the past quarter-century suggest that a black hole at least 7,500 times the mass of the Sun inhabits the cluster's center. It is one of the few possible intermediate-mass black holes discovered so far. [NASA/STScI]

Sagittarius is disappearing into the evening twilight. Look for the outline of a teapot low in the south and southwest as darkness falls. The teapot is pouring its starry brew toward the horizon.

A giant star cluster lurks near the star that connects the lid and the spout. Through binoculars, NGC 6624 looks like a slightly fuzzy star. A small telescope reveals many of its individual stars.

A recent study says that a middleweight black hole may inhabit the center of the cluster. If so, it’s bigger than the black holes that form from collapsing stars, but smaller than the monsters that live in the hearts of galaxies.

For more than 25 years, a team of astronomers has used a radio telescope in England to monitor a pulsar in the cluster — the collapsed core of a once mighty star. The star is quite near the cluster’s heart. And it spins almost 200 times a second. That rate is like the ticking of a highly accurate clock — it keeps near-perfect time. So if the timing changes, it’s usually the result of something near the pulsar.

In this case, the astronomers determined that changes in the pulsar’s timing were caused by a black hole at least 7500 times the mass of the Sun.

The astronomers say there’s a chance the pulsar orbits a lighter object. And another study found no signature of a black hole in X-rays from the cluster. So it’s still not certain whether a middleweight black hole lives in the heart of NGC 6624.