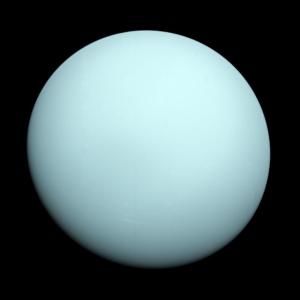 Uranus, the solar system's third-largest planet, is an almost featureless ball in this 1986 image from Voyager 2, the only spacecraft to visit it. Methane in the upper atmosphere absorbs red wavelengths of light, producing the planet's color. Uranus is at its best for the year in late October, when it lines up opposite the Sun. Although it will shine at its brightest, you still need binoculars or a telescope to see it. [NASA/JPL]

Most of the planets in the solar system stand more or less upright as they orbit the Sun. That makes them look like spinning gyroscopes. But not Uranus. The seventh planet lies on its side, so compared to the other planets, it moves more like a bowling ball.

That odd configuration probably was the result of a giant impact. Another planet may have struck Uranus, knocking it on its side. And a recent study says the impact could have had other effects.

The study was led by astronomers at Durham University in the UK. They used a supercomputer to simulate different impact scenarios. They found that present-day Uranus was best explained by a glancing impact by a planet about twice as big as Earth. That would have knocked Uranus over, but allowed it to keep most of its atmosphere. Debris from the impact could have created the giant planet’s innermost moons.

The impact also could account for the fact that Uranus is quite cold — colder than Neptune, which is a billion miles farther from the Sun. Rocky debris could have settled inside the planet. The rock would prevent heat from the interior from reaching the top of Uranus’s atmosphere — keeping the planet nice and cold.

And Uranus is putting in its best showing of the year. It lines up opposite the Sun, so it rises around sunset and is in view all night. It’s brightest for the year, too, although you still need binoculars to see it.

We’ll have more about Uranus tomorrow.