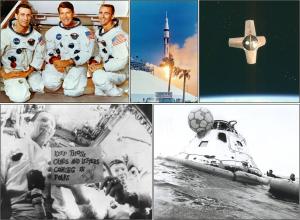 The United States restarted the race to the Moon with the launch of Apollo 7 on October 11, 1968. It was the first orbital test of the Apollo command and service modules, which would shuttle later astronauts to the Moon. The 10-day flight was a complete success, allowing NASA to send the next mission, Apollo 8, to orbit the Moon. The flight came 21 months after the death of the crew of Apollo 1 in a launch-pad fire. From top left: Crew members Don Eisele, Wally Schirra, and Walt Cunningham in front of their spacecraft; launch from Cape Kennedy; a practice rendezvous with the second stage of their booster; bobbing in the ocean after splashdown; a frame from one of the crew's many television broadcasts, which were big hits with the American public. [NASA]

A half-century ago, the Moon Race was entering its final lap. Three American astronauts were about to ride an Apollo spacecraft into orbit — its first manned flight.

The race had stalled almost two years earlier. The crew of Apollo 1 had died in a fire inside the spacecraft. And the first flight of the Soviet Soyuz spacecraft ended with a fatal crash.

But on October 11th of 1968, the crew of Apollo 7 was standing by at Cape Kennedy, ready to head for Earth orbit: Wally Schirra, one of the original Mercury astronauts, and space rookies Don Eisele and Walter Cunningham. They would spend more than 10 days in space, giving the Apollo mothership and support systems on the ground a thorough checkout.

The mission was a complete success. The Apollo spacecraft performed without a hitch. That cleared the way for the next Apollo to carry astronauts to lunar orbit — bringing the United States just a few steps from victory in the race to the Moon.

And the Moon is quite low in the southwest during evening twilight tonight. It’s a beautiful crescent. The planet Jupiter stands just below it, shining like a brilliant star.