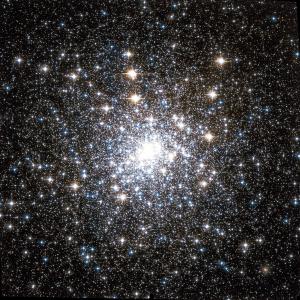 The globular cluster Messier 30 appears to be an interloper from another galaxy. The dense cluster probably belonged to a galaxy that was consumed by the Milky Way in the distant past. This Hubble Space Telescope view shows the cluster's dense center and some of its less-populous outskirts. The entire cluster spans about 300 light-years. It is in the constellation Capricornus. [NASA]

An interloper from another galaxy scoots low across the south on October evenings. It’s a tight family of stars — hundreds of thousands of them. The stars probably belonged to another galaxy that was consumed by the Milky Way in the distant past.

Messier 30 is in the lower left corner of Capricornus. It’s low in the south at nightfall. The sea-goat’s brightest stars form a wide triangle. And bright orange Mars is passing through the constellation right now, making it easier to spot.

Messier 30 is a globular cluster — a ball of stars that spans about 300 light-years. Most of the stars are concentrated in the cluster’s dense core. The numbers trail off as you move toward the cluster’s edge. Anything that wanders too far from the center gets stripped away by the gravity of the rest of the galaxy.

The Milky Way is home to more than 150 globulars. Astronomers have discovered, though, that several of them have come from other galaxies. And that includes M30.

The main clue to its origin is its orbit. As it circles the center of the galaxy, M 30 moves in the opposite direction from most of the stars and star clusters. The only way for such a massive cluster to move against the traffic is if it came from outside the galaxy. So Messier 30 isn’t a native of the Milky Way. Instead, it was pulled in by the Milky Way’s powerful gravity — making it a refugee from another galaxy.