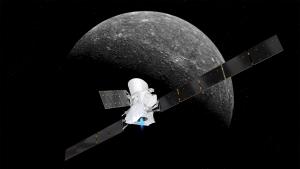 BepiColombo, a European mission, approaches Mercury in this artist's concept. The craft is scheduled for launch as early as October 18. It will consist of two separate spacecraft that will ride to Mercury together. They will separate when they arrive at the planet in December 2025. BepiColombo will be only the second mission to orbit Mercury, after Messenger, a NASA mission that concluded its work in 2015. [ESA/ATG Medialab; NASA/JPL]

Getting to Mercury isn’t easy. The next mission to the Sun’s closest planet will need seven years to arrive and enter orbit. And to achieve that orbit, it’ll have to fly past Earth once, Venus twice, and Mercury six times.

BepiColombo is scheduled for launch later this month. The mission is a joint project of Europe and Japan. It’s named for Giuseppe Colombo, a scientist who studied Mercury and worked on Europe’s mission to Comet Halley.

The mission will consist of two spacecraft. They’ll travel to Mercury together, shuttled by a sort of space-going Uber that’s powered by ion engines. When they get to the planet, the two craft will enter separate orbits. One will study Mercury’s composition and structure. The other will study its magnetic field and how the field interacts with the solar wind.

Only two spacecraft have visited Mercury. Mariner 10 flew past it three times in the 1970s. And Messenger orbited Mercury from 2011 to 2015. BepiColombo will build on their work, helping scientists piece together the history of Mercury. And that will help them understand how all of the Sun’s rocky planets were born.

Reaching Mercury is tough because a craft has to fight against the gravitational pull of the Sun. Each of BepiColombo’s planetary encounters will help it put on the brakes, and approach Mercury at the right angle. If everything goes well, the craft will ease into orbit in December of 2025.