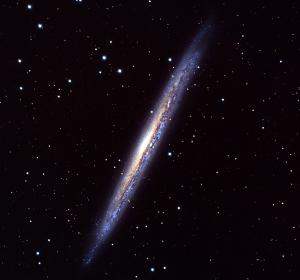 NGC 5907, one of the flattest galaxies known, forms a thin streak across the sky. Unlike most disk galaxies, including the Milky Way, it has no big "bulge" of stars in its middle. Streamers of stars surround the pancake-like galaxy. They may be the remains of one or more smaller galaxies pulled apart by NGC 5907's stronger gravity. The galaxy is in Draco, and is about 55 million light-years from Earth. [Wikimedia/Jschulman555]

Our galaxy is a giant spiral. Most of its stars — including the Sun — reside in a thin disk that resembles a pancake. But the Milky Way isn’t entirely flat. Instead, a “bulge” of stars in the middle juts above and below the pancake.

A spiral galaxy in Draco, the dragon, is much flatter than ours. In fact, it has no central bulge at all. Instead, nearly all of its light comes from the disk.

NGC 5907 is about 55 million light-years away. Because it’s both flat and edge-on, astronomers get a good look at the faint structures above and below its disk. And they’ve detected faint trails in the galaxy’s halo — a vast region of space around the disk. The trails probably are streamers of stars from a nearby small galaxy. The galaxy shed the stars because the gravity of NGC 5907 is tearing it apart.

The same thing is happening in the Milky Way. In 1994, astronomers discovered a close galaxy in Sagittarius that our galaxy is tearing apart. The smaller galaxy’s stars are spilling into the Milky Way’s halo. That’s one reason that giant spiral galaxies grew so colossal: They stole the stars of lesser galaxies.

Draco is high in the north and northwest as night falls, above the Big Dipper. NGC 5907 is well above the end of the dipper’s handle.