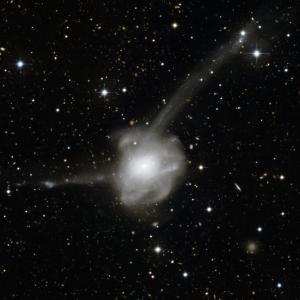 A pair of colliding galaxies known as NGC 7252 resembles a picture of an atom, with electrons orbiting a nucleus. That resemblance earned NGC 7252 the nickname "Atoms for Peace Galaxy," after a speech presented by President Dwight Eisenhower in 1953. The interaction between the two galaxies has pulled out great streamers of stars and stirred up clouds of gas and dust, giving birth to more stars. NGC 7252 is in the constellation Aquarius. [European Southern Observatory]

Sixty-five years ago, in a speech to the United Nations, President Dwight Eisenhower urged the world to abandon atomic weapons and use the atom for peaceful purposes.

The speech became known as “Atoms-for-Peace.” And it inspired astronomers to name a galaxy for it. So NGC 7252 became known as the Atoms for Peace galaxy. It was picked because it looks electrons orbiting the nucleus of an atom.

The galaxy got that shape because it’s the aftermath of a collision between at least two galaxies. The impact took place perhaps a billion years ago. It pulled out giant streamers of stars that span hundreds of thousands of light-years. And it stirred up clouds of gas and dust in the colliding galaxies, causing them to give birth to huge numbers of stars.

The core of one of the colliding galaxies survives in the center of NGC 7252. It forms a beautiful spiral that spans 10,000 light-years.

Eventually, the galaxy will settle down to form a smooth, featureless ball — and the Atoms for Peace outline will disappear.

NGC 7252 is in Aquarius. The constellation is low in the southeast at nightfall, and scooches across the south during the night.