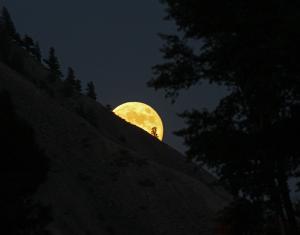 The Moon rises above Mt. Everts near Mammoth Hot Springs in Yellowstone National Park. The Moon will be full on the night of September 24. As the full Moon closest to the autumnal equinox, it is known as the Harvest Moon. It will appear almost full for a day on either side of the formal point of full Moon, though, adding its light to the autumn nights. [Jim Peaco/National Park Service]

The most famous of all full Moons lights up the sky the next few nights: the Harvest Moon. It’s the full Moon closest to the autumnal equinox, which was yesterday.

The name originated several centuries ago, in northern Europe. The Moon’s light helped farmers harvest their crops long into the night — and not just because the full Moon is bright. At those latitudes, the full Moon rises only about a half-hour later each night at this time of year, so there’s not a long gap between sunset and moonrise. That made it possible to continue the harvest for several nights without a break before the Moon rose.

Technically, a full Moon lasts only an instant. It occurs when the Moon lines up exactly opposite the Sun in Earth’s sky. At that moment, sunlight illuminates the entire lunar hemisphere that faces Earth.

But the Moon orbits Earth at more than 2,000 miles an hour. So just moments before or after the instant of full Moon, the Moon is not quite opposite the Sun.

Practically, though, none of us can tell the difference. A day before or after the moment of full Moon, sunlight illuminates 98 percent or more of the lunar disk. So it looks full.

This year, the Moon will be full at 9:52 p.m. Central Daylight Time tomorrow night — the precise moment of the Harvest Moon. But it’ll look almost exactly the same on the nights before and after that. So the Harvest Moon spreads across three nights — a lot of light from the full or almost-full Moon.