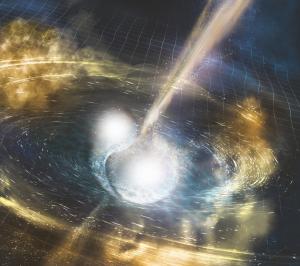 Two neutron stars whirl together and merge to form a low-mass black hole in this artist's concept. Detectors on Earth detected gravitational waves produced by such a merger last year. The waves are "ripples" in space-time that travel across the universe. The collision also left a debris of newly minted chemical elements, including gold and silver. [NSF/LIGO/Sonoma State University/A. Simonnet]

What jiggles the universe, briefly outshines a whole galaxy of stars, and leaves both sparkly and dark remnants? The answer appears to be the merger of two neutron stars — the ultra-dense corpses of once mighty stars.

Astronomers observed such a merger late last year. It produced an outburst of gravitational waves, which “jiggled” space and time. Special observatories detected those waves, which produced a quick “chirp.” Less than two seconds later, telescopes in space and on the ground also saw the merger, as dazzling outbursts of X-rays and other forms of energy.

Continued observations showed that debris from the merger contained huge amounts of gold, silver, and similar elements — enough to make several planets as massive as Earth. That suggests that most of those elements are produced by such mergers.

And one study concluded that the merger produced a black hole. It’s the smallest yet seen, at about 2.7 times the mass of the Sun.

The study team observed the merger with Chandra X-Ray Observatory, a space telescope. If the merger had produced a heavy neutron star instead of a black hole, the star should have produced far more X-rays than the telescope saw. Instead, the X-rays probably were produced as debris from the outburst rammed into gas and dust around the merged stars.

More observations over the next couple of years should settle the question — perhaps confirming the birth of a black hole.