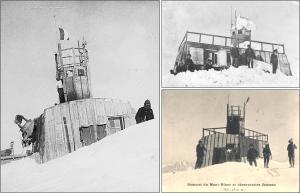 One of the world's first high-altitude observatories was built atop ice-covered Mont Blanc, in France. It took its first observations in September 1893. It was the creation of French astronomer Jules Janssen, who studied the Sun. The small observatory, shown here from several angles, had telescopes for watching the Sun and other objects. All of the materials for the building had to be carried to the summit by hand, requiring hundreds of grueling trips. Janssen himself, who was nearing 70, was carried to the top on a sled. The observatory was abandoned in 1909 when a crevasse opened beneath it.

Jules Janssen spent a lot of time in high places. The French astronomer viewed a solar eclipse from the Himalayas. He escaped from Paris in a hot air balloon. And he almost died while in the mountains of South America.

But 125 years ago this week, he topped even those feats. He took the first observations from a small observatory at the summit of Mont Blanc, the tallest mountain in Europe — almost 16,000 feet high.

Janssen specialized in studying the Sun. And one problem intrigued him. He wasn’t sure whether oxygen in the Sun’s spectrum came from the Sun itself, or from Earth’s atmosphere. He’d taken spectra from different altitudes, but wanted to go higher. So he picked Mont Blanc.

Building an observatory there took a major effort. The summit was covered with ice, so there was no rock to anchor the observatory. And everything had to be carried to the top by hand.

The observatory was finished in September of 1893. Janssen, who was nearing 70, was carried up the mountain in a sled on the 11th. A storm delayed his research, but he made his first observations a few days later.

Over the next few years, about 25 scientists visited the facility. They photographed the Sun, listened for solar radio waves, and studied the planets. They also studied the weather.

By 1906, though, the shifting ice had tilted the observatory. And in 1909, a crevasse opened beneath it, so it was torn down — ending the short life of the Mont Blanc Observatory.