Some stars spin so fast that they’re shaped more like lozenges than balls. An example shines in the southernmost part of the constellation Ophiuchus, which is in the southern sky at nightfall.

51 Ophiuchi is about 400 light-years from Earth. It’s a young blue star, hotter than the Sun and about four times as massive. But what really sets it apart are its rapid spin and its odd shape. The star’s equator whirls around at 600,000 miles per hour or faster. By contrast, the Sun, which is an almost perfect sphere, rotates at just 4500 miles per hour.

As you might imagine, centrifugal force has puffed up 51 Ophiuchi’s equator, so the star isn't round like the Sun. Recent observations reveal that at the equator, it’s about eight times the Sun’s diameter. From pole to pole, though, it’s less than six times as large as the Sun.

And 51 Ophiuchi isn't alone. Other rapidly spinning stars are also shaped like squashed beachballs. Altair, in the eagle, and Regulus, the heart of the lion, both spin so fast that if you could view them close up, they would look like glowing lozenges rather than spheres.

But 51 Ophiuchi is much farther away than those stars are, so it’s barely visible to the unaided eye. To see it, you need a good starchart and a nice, dark sky, away from city lights. You’ll find this intriguing star in the south as darkness falls — a star that has spun itself out of shape. 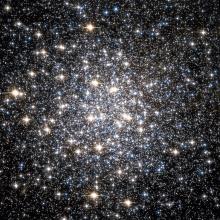