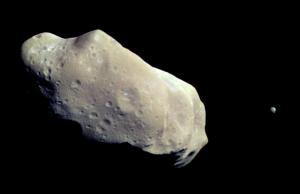 Ida, the first known moon of an asteroid, is the tiny dot to the right of the asteroid Dactyl in this enhanced-color image from the Galileo spacecraft. The little moon was discovered in 1993, when Galileo was passing through the asteroid belt on its way to Jupiter. Since then, astronomers have discovered moons orbiting more than 300 asteroids, including systems with two or more moons. Many of the moons probably were blasted off their parent asteroids during collisions with other space rocks. [NASA/JPL]

A big asteroid, named Florence, flew about four-and-a-half million miles from Earth back in September. Astronomers took a look at it with radio telescopes. And they discovered that it wasn’t alone. Two small moons orbit the asteroid. One is about the length of two football fields, while the other spans three football fields.

No one was really surprised to find the little moons. That’s because more than 300 asteroids have known moons, including quite a few with two of them, and some that have three.

The first asteroid moon was discovered in pictures that were snapped 25 years ago today. The Galileo spacecraft was passing through the asteroid belt on its way to Jupiter. It flew close to Ida, an asteroid that’s about 35 miles long. When mission scientists looked at the pictures of Ida a few days later, they discovered a mile-wide companion. They named it Dactyl, after creatures from Greek mythology that lived on Mount Ida.

The most likely way for an asteroid to get a moon is through a collision with another asteroid. If the impact is at the right speed and angle, it can chip off a chunk of rock and send it into orbit. If the impact is too strong, though, the debris sails away into space, leaving the parent asteroid behind.

In some cases, a collision may split an asteroid in two. That creates a pair of twins — two asteroids of roughly equal size orbiting the Sun together.

Tomorrow: finding planets toward the heart of the galaxy.