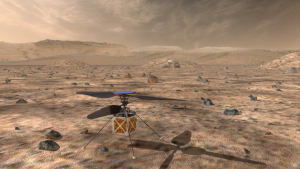 The next Mars rover, scheduled for launch in 2020, will carry a small helicopter, as depicted in this artist's concept. The craft is expected to reach altitudes of up to 1,000 feet and fly up to about 2,000 feet from the rover (shown in the background), which will relay the chopper's findings to Earth. [NASA/JPL]

So far, the only way to get around on Mars has been on wheels. NASA has dropped four rovers onto the Red Planet, and each of them has maneuvered on six wheels. But wheels probably won’t always be the only way to move across Mars. In fact, the next Mars rover is scheduled to carry a small sidekick: a four-pound helicopter.

Flying on Mars won’t be easy. Atmospheric pressure is less than one percent of the pressure on Earth. That means there’s less “air” to support an aircraft. That hasn’t stopped people from trying, though. Various groups have proposed craft with wings — both gliders and powered craft. So far, though, none of those concepts has gone anywhere.

The helicopter, though, seems ready for flight. The tiny craft will have two rotors, stacked on top of each other. One will spin clockwise, and the other counter-clockwise. That will lift the chopper and keep it stable. The softball-sized fuselage will contain power and radio systems, and a pair of cameras.

Plans call for the helicopter to reach altitudes of more than a thousand feet, and roam up to a couple of thousand feet from the rover. Launch for the rover and its flying companion is scheduled for 2020.

And the next couple of nights are great times to view their target — the planet Mars. It looks like a bright orange star low in the southeast at nightfall. It’s close to the lower left of the Moon tonight, and a similar distance to the lower right of the Moon tomorrow night.