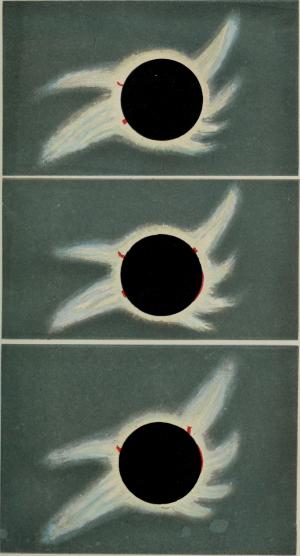 Three sketches depict the total solar eclipse of August 18, 1868. During the eclipse, French astronomer Pierre Janssen observed the filaments of gas that erupt from the Sun's surface. His observations revealed the chemical fingerprint of an unknown element in the Sun's spectrum. The element was later named helium, after the Greek sun god Helios. Although it had never been seen before, on or off Earth, helium is the second-most-abundant chemical element in the universe. [Wikipedia]

It’s been a year since American skies were darkened by a total solar eclipse. Astronomers are still studying their observations of it. And it might take a while before they know if they saw anything new.

That wasn’t the case for an eclipse that took place 150 years ago tomorrow. One astronomer quickly realized that he’d discovered something unexpected: a new element in the Sun’s atmosphere. But it did take a while for most other astronomers to accept it.

Pierre Janssen was a professor at the University of Paris. He traveled to India to observe the eclipse of August 18th, 1868.

Only a few years earlier, another physicist had found that you could identify the elements in the atmosphere of the Sun and other stars by breaking their light into its individual wavelengths. For the Sun, astronomers thought the only way to make it work was to look at filaments of gas around the Sun during an eclipse.

When Janssen looked at those filaments, he detected the “fingerprint” of an unknown element. Later, a British scientist found the same element when he looked at the un-eclipsed Sun. They submitted their papers on the same day, so they share credit for the discovery.

That element later was named helium, after the Greek name for the Sun. It wasn’t found on Earth until many years later. Yet it’s the second-most-abundant element in the universe, so it makes up a large fraction of the Sun — the first element discovered beyond our own planet.