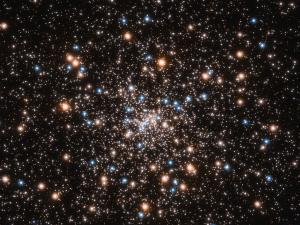 A myriad stars sparkle in this Hubble Space Telescope view of NGC 6397, a globular cluster in the southern constellation Ara. The red stars are bloated and cool, while the blue stars are smaller but much hotter. Using Hubble observations, astronomers determined that the cluster is about 7,800 light-years away. With an accurate distance, they then determined that NGC 6397 formed about 13.4 billion years ago, just 400 million years after the Big Bang. The cluster, which contains several hundred thousand stars, has also served as a laboratory for astronomers who study the masses of stars and other subjects. [NASA/ESA/T. Brown and S. Casertano (STScI)]

NGC 6397 seems like a pretty ordinary globular star cluster. It’s not especially big or bright, and nothing about its stars is going to strike anyone as odd. Yet it’s been an important astronomical laboratory. Among other things, it’s helped astronomers determine the age of the galaxy, and the minimum “weight” of a star.

NGC 6397 is in the constellation Ara, the altar. It’s below the stinger of Scorpius, the scorpion. That puts it so far south that it’s not visible from most of the United States. But it’s in great view for Hubble Space Telescope, which has monitored the cluster for decades.

NGC 6397 is a globular cluster — several hundred thousand stars packed into a ball only a few dozen light-years across. The Milky Way contains about 150 of these clusters, which are the galaxy’s oldest inhabitants.

Over the decades, Hubble has carefully monitored many of the cluster’s stars. One set of observations helped astronomers lock down the minimum mass required for an object to shine as a true star — about eight percent the mass of the Sun.

And a more recent set of observations helped measure the cluster’s distance with unprecedented accuracy — 7800 light-years, one of the closest of all globulars. That number is important for determining the cluster’s age — 13.4 billion years. That means that NGC 6397 — and its home galaxy, the Milky Way — took shape when the universe was just about 400 million years old.