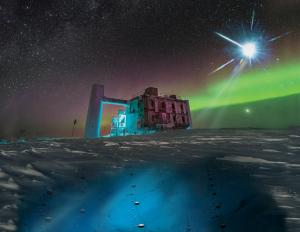 IceCube, a "telescope" at the south pole, recently detected a source of powerful cosmic rays, as depicted in this composite image. IceCube consists of thousands of light detectors buried deep in the clear ice (illustration, bottom of the image). Those detectors recently saw a neutrino passing through the ice. By tracing its path into space, and comparing that with observations made by space telescopes, scientists concluded that the neutrino came from a blazar (depicted at top right), which is a disk of hot, bright gas around a supermassive black hole in the heart of a galaxy. The same process that produces the neutrinos also produces cosmic rays, which are atomic particles that move through space at almost the speed of light. The detection was the first confirmation of the source of the most powerful cosmic rays. IceCube is one of several astronomical observatories stationed at the south pole. [IceCube/NSF]

The south pole isn’t a very pleasant place to live, especially during the winter. It’s dark for six months, and temperatures average about 70 below zero. Yet those conditions make it a great place for astronomy. And scientists are taking advantage of those conditions now, during the last couple of months of southern winter.

One of their tools is the South Pole Telescope. It’s a 10-meter dish that looks at certain wavelengths of radio waves. Water vapor in the atmosphere interferes with those wavelengths. The south pole is so high and cold, though, that there’s almost no water vapor above it.

Among other things, the telescope is looking at the afterglow of the Big Bang, and at how the first clusters of galaxies interacted with it. It’s also contributing to the search for dark matter.

Scientists also operate an experiment called IceCube — an array of more than 5,000 light sensors buried a mile deep. The ice above it filters out radiation that can interfere with the detectors.

In particular, IceCube is studying neutrinos. They’re everywhere — a hundred trillion of them pass through your body every second. But they almost never interact with other matter. IceCube catches a few hundred of these interactions every year — from particles that have zipped all the way through Earth. The detections reveal details about the source of the neutrinos, and about the particles themselves — leading-edge science at the south pole.