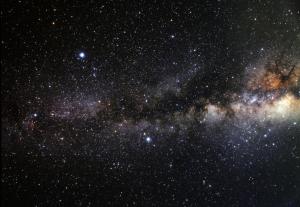 A lane of dust and gas known as the Dark Rift slices through the glowing band of the Milky Way. It absorbs the light of stars behind it, making that part of the sky look empty. It's visible on summer nights from dark skywatching sites. This image also features the Summer Triangle, at left. The brightest point of the triangle, the star Vega, is at upper left. The other points of the triangle are Deneb, to the lower left of Vega (and near the end of the rift), and Altair, to the lower right of the others (on the opposite side of the rift). [NASA]

The band of light that outlines the disk of the Milky Way galaxy is a rare sight. To see it, you need especially dark skies — no moonlight, and no streetlamps or other artificial light sources. And as luck would have it, there’s no moonlight to spoil the show for the next few evenings.

It’s known as the Great Rift. It looks like it’s empty — a lane where there are no stars at all. But that’s deceiving. There are plenty of stars, but they’re hidden behind dark clouds of gas and dust. The dust grains block the light of the stars behind them, just as clouds here on Earth can block the light from the Sun and stars.

The clouds are thousands of light-years from Earth. They’re between us and the Sagittarius Arm — one of the spiral arms that make the Milky Way galaxy look like a pinwheel. Some of the clouds are giving birth to new stars. And some of those stars will clear away some of the gas and dust around them, making the Milky Way shine a little bit brighter.

And if you can find a nice, dark skywatching site, look for the Milky Way in the east beginning as soon as twilight fades away. The region with the Great Rift stretches from teapot-shaped Sagittarius, low in the south, over to graceful Cygnus, the swan, high in the east.

We’ll talk about some bright clouds in the Milky Way tomorrow.