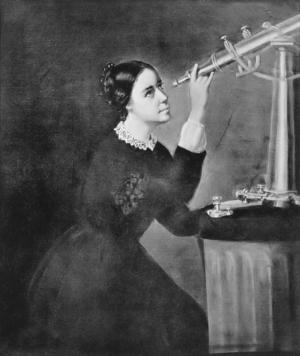 Maria Mitchell, shown in this 1851 portrait by H. Dassell, was the first American woman to become a professional astronomer. August 1 is the 200th anniversary of her birth. She came to fame in 1847, when she discovered a comet. The discovery earned her many accolades, including a gold medal from the king of Denmark. After the Civil War, she was hired as the first faculty member of the new Vassar Women's College, where she established an observatory.

When Matthew Vassar was setting up a new women’s college at the end of the Civil War, the first professor he wanted to hire was astronomer Maria Mitchell. She’d discovered a comet in 1847, bringing her international fame.

But Mitchell had some conditions: She wanted an observatory, complete with a good telescope and apartments for herself and her father. She got them. So Mitchell became the country’s first female astronomy professor.

Mitchell was born 200 years ago today, in Nantucket. Her father was an amateur astronomer, and he taught Maria how to use the telescope. Her comet discovery led to membership in several science organizations — the first woman to belong to any of them.

At Vassar, Mitchell established a busy astronomy program. Beginning in 1873, she and her students took daily photographs of the Sun — one of the earliest photographic records of sunspots. They also journeyed to solar eclipses.

Yet Mitchell’s most important contributions were social. She advocated women’s rights, and was a founder of the American Association for the Advancement of Women. She fought for equal pay — which she got — and encouraged her students to work part-time to help them be independent.

Mitchell died in 1889. But several of her students — and their students — made important contributions to astronomy. And although it no longer watches the stars, the observatory building she wanted still stands — the Maria Mitchell Observatory.