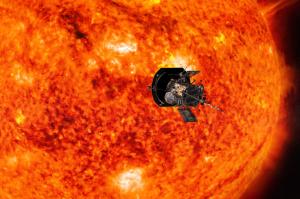 This artist's concept shows a new spacecraft, Parker Solar Probe, peering at the Sun from far closer range than any previous mission. Scheduled for launch no earlier than August 6, the craft will study the Sun's hot outer atmosphere, known as the corona, and the region where the solar wind is generated. It will loop around the Sun 24 times, eventually dropping to within about four million miles (six million km) of the Sun's surface. A Sun shield will be heated to 2,500 degrees Fahrenheit, but will keep the craft's instruments at room temperatures. [NASA/JHUAPL/Steve Gribben]

In mythology, Icarus and his father tried to fly away from the island of Crete with wings made of wax and feathers. The father warned Icarus not to fly too close to the Sun. But Icarus ignored the advice and soared high into the sky. The Sun’s heat then melted his wings, so he plunged into the sea and drowned.

NASA is about to launch a mission that will venture far closer to the Sun than any other spacecraft to date. Unlike Icarus, though, it’s carrying protection: a shield that will keep its instruments as cool as a spring day.

The launch window for Parker Solar Probe opens tomorrow. The craft will orbit the Sun 24 times, eventually dropping to within four million miles of the surface. Temperatures on the leading edge of its heat shield will reach 2500 degrees Fahrenheit. But behind the shield, everything will be nice and cool.

The probe is named for Eugene Parker -- the first NASA spacecraft named for a living person. In the 1950s, Parker proposed that a complex interplay of hot gas and magnetic fields on the Sun produces a “wind” of charged particles. Spacecraft discovered the solar wind in the ’60s.

Parker Solar Probe will study how and where that wind is generated, and how it’s accelerated to millions of miles per hour. It’ll also study the Sun’s outer atmosphere, the corona, which is much hotter than the surface of the Sun. The observations should help scientists better understand our star -- without risking life and limb.