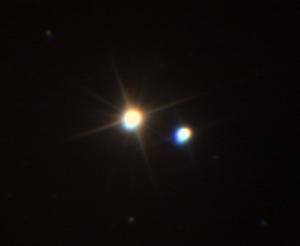 The stars of Albireo, which represent the beak of Cygnus, the celestial swan, show off their colors in this view from the Smithsonian Institution. One star is golden orange, while the other shines blue-white. The golden star actually consists of two or more stars on its own. They are so close together, however, that it is impossible to separate them into separate points of light. It's not certain if the two visible components form a true binary or just happen to line up in the same direction. [Smithsonian Institution]

For most birds, the beautiful feathers get most of the attention. And that’s pretty much the case for Cygnus, the celestial swan. To the eye alone, its most impressive sight is Deneb, the bright star that represents its tail feathers.

If you look more closely, though, the swan’s fainter beak is far more colorful. Through a telescope, that single pinpoint becomes double. One of the stars is golden orange, the other is blue-white. That contrast makes Albireo a favorite target for many double-star watchers.

The golden star is actually two or more stars on its own. They’re so close together that they can’t be separated even through a telescope. The main star -- the star we see -- is an orange giant. It has at least one companion, and perhaps two.

The other visible member of Albireo is thousands of degrees hotter than the Sun, hence the blue-white color.

It’s not clear whether the two visible components are a true binary or just happen to line up in the same direction. Astronomers determine if two stars form a binary by measuring their relative motions across the sky. If the stars are bound, then their paths curve around each other. But the stars of Albireo are so far apart that there hasn’t been enough time to determine whether that’s happening.

Albireo is in good view on summer nights. Cygnus is high in the east at nightfall, with its body parallel to the horizon. Brilliant Deneb is at the left end of the body, with Albireo at the right.