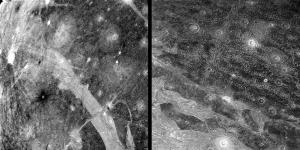 Two views of the surface of Ganymede, the largest moon of Jupiter, show sets of parallel ridges and grooves, impact craters, and other features. The grooved terrain probably is younger than the surrounding landscape, which contains more craters. A possible global ocean of liquid water may be hidden deep below the big moon's icy crust. These images were snapped by Voyager 2 when it flew through the Jovian system in 1979. [NASA/JPL]

Ganymede orbits the biggest planet in the solar system, Jupiter. The planet looks like a brilliant star just below our own moon this evening. Binoculars reveal Ganymede and three other Jovian moons, which look like tiny stars near the planet.

The surface of Ganymede is ancient -- about a third of it appears to be at least four billion years old. It’s dark, and covered by old craters. The rest of the surface is a bit younger and lighter, and is marked by long cliffs and grooves.

But Ganymede’s most interesting feature lies far below the surface -- a possible ocean of liquid water. It’s sandwiched between the moon’s icy crust and ice and rock below the ocean. It could be a habitat for life. But so far, we don’t know what conditions are like in the ocean, so no one is sure how good a home it would make.

Europe is preparing a spacecraft that should reveal many details about the ocean. Known as JUICE, it’s scheduled for launch in four years. It’ll study a couple of other moons before entering orbit around Ganymede. From there, it will study the structure, composition, and odd surface of Ganymede -- observations that will reveal much more about the possible giant ocean in this giant moon.