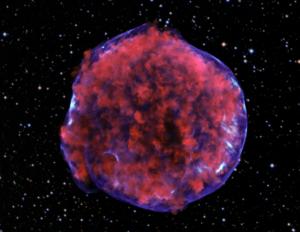 The remains of an exploded star continue to expand, as shown in this multiwavelength image. Known as Tycho's Supernova, for astronomer Tycho Brahe, who wrote about it, the supernova was first seen in 1572. It formed when a small stellar corpse stole gas from a companion star. So much gas piled up on the surface of the small star that it triggered a runaway nuclear explosion, blasting the star to bits. In this image, red shows material that is moving toward us, powered by the energy of the explosion.  [NASA/CXC/Rutgers/DSS/K. Eriksen et al.]

Cassiopeia the queen sits low in the north-northeast at nightfall, then wheels high to the north at first light. Its stars form a bright letter W, so it’s one of the easiest constellations to pick out.

It would have been a lot easier to pick out in 1572. A “new” star appeared near the W -- a star so bright that it was visible in daylight.

And about a century later, another new star flared to life not far away. There are only sketchy indications that it was ever seen. But today, astronomers know all about both stars -- they were blasting themselves to bits as supernovae. Astronomers know that because they can see and study the remains of both stars -- expanding bubbles of gas and dust.

The first star is known as Tycho’s supernova. That’s because it was studied in detail by Tycho Brahe, the leading astronomer of the time. The star exploded when the small corpse of a once normal star stole gas from a companion star. When enough gas built up, the star blasted itself to smithereens. Debris from the supernova forms a colorful bubble. It spans about 35 light-years, and it’s expanding at about 10 million miles per hour.

The other star is Cassiopeia A. It formed when the core of a supergiant star collapsed. Its outer layers then blasted into space. The debris from that blast also spans many light-years, and it’s also still expanding.

These and other supernova remnants are important for several reasons, and we’ll talk about them tomorrow.