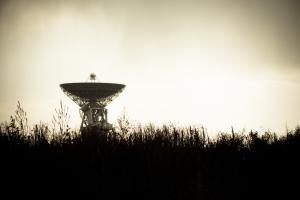 Although the search for aliens has come up empty, astronomers are continuing the hunt. They are using radio telescopes and other equipment to listen for signals or detect other hints of intelligent life in other star systems. [Pixabay]

The search for aliens keeps coming up empty. Wide scans for signs of intelligent life have heard nothing. And so far, even the best prospects have had natural causes.

A project called Breakthrough Listen has been scanning the skies for alien radio traffic for a couple of years. It uses radio telescopes in the United States and Australia. The telescopes are listening for signals from a million nearby stars, plus the center of the Milky Way galaxy and a hundred other galaxies.

Results reported to date have showed a few odd signals, but none is expected to have been created by aliens.

Back in December, the project scanned an asteroid from deep space that was passing through the solar system. Some had speculated that it was an alien probe. But the study revealed no radio waves at all. So if the asteroid was dispatched by ET, it was either dead or in stealth mode.

And what some thought could be “alien megastructures” encircling a distant star is probably just dust or comets. Known as Tabby’s Star, its light flickers. Some suggested the flickers were giant artificial structures passing in front of the star.

But astronomers examined the star at all wavelengths of light. They found that it flickers at some wavelengths, but not all. That means that whatever is passing in front of the star isn’t solid, as big structures would be. Instead, it’s probably clumpy clouds of dust and comets. So one more possible sign of alien life has turned up empty.