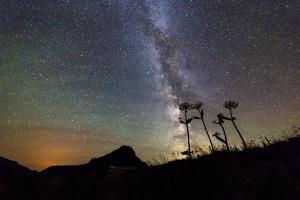 The Milky Way glows above the mountains of Glacier National Park, Montana, with a bit of lingering twilight. That hazy band of light, which is visible under especially dark skies, outlines the disk of our home galaxy. It is the combined glow of millions of stars, which are too faint to see as individual points of light. [Jacob Frank/National Park Service]

Moon-free summer evenings are the best times of year to catch the splendor of the Milky Way. This hazy band of light represents the combined glow of millions of stars. They outline the disk of the Milky Way galaxy.

The disk spans 100,000 light-years or more. And out where we are, more than half way from the center of the disk to its rim, it’s a few thousand light-years thick.

That means we don’t know what the galaxy really looks like right now -- we have to wait for light to reach us. So one of those millions of stars in the Milky Way could have exploded thousands of years ago, but we might not know it for thousands of years more.

To see the splendor of the Milky Way -- with or without exploding stars -- you need to get away from city lights. After twilight fades away, it stretches from teapot-shaped Sagittarius, in the southeast, through the Summer Triangle in the east, and down to W-shaped Cassiopeia in the north. And it climbs high overhead by the wee hours of the morning. It’s a sight you need to see at least once. And when you do, you’re likely to want to see it again -- the outline of our galactic home.