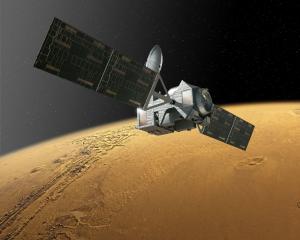 Trace Gas Orbiter looks down upon the surface of Mars in this artist's concept. The European craft is "sniffing" the Martian atmosphere for methane and other compounds. On Earth, most methane is produced by living organisms, although some comes from volcanic processes. Several observations by other spacecraft and by ground-based telescopes have detected possible methane in the atmosphere, but none could determine the original of the compound. Trace Gas Orbiter is designed to reveal both the physical location of the methane and whether it was produced by biological or geological processes.  [ESA]

There’s no privacy for Mars. As of late May, six spacecraft were in orbit around the Red Planet, with two rovers on the surface. There’s never been a time when more craft were operating at Mars or anywhere else beyond Earth.

The most recent craft to get to work is Trace Gas Orbiter. It arrived at Mars in October of 2016. Engineers spent a few months adjusting the angle of its orbit. Then, starting in March of 2017, they adjusted its altitude. The European craft used a technique called aerobraking. On each orbit, it dipped into the outer fringes of the atmosphere. Friction with the atmosphere dropped the high point of its orbit. It completed those maneuvers and entered its final science orbit in April.

Now, Trace Gas Orbiter is trying to sniff out certain compounds in Mars’s upper atmosphere. In particular, it’s looking for methane. On Earth, most methane comes from living organisms, or from deposits of hydrocarbons. A small amount comes from volcanoes.

Other probes have detected small amounts of methane on Mars. But they couldn’t tell where it came from. Trace Gas Orbiter will make far more precise measurements. That will help scientists determine where on Mars the methane comes from, and what’s producing it — life or geology.

And Mars is growing brighter by the day. It’s in good view in the southeast by midnight, and looks like a bright orange star. Tonight, it’s to the lower left of the Moon.