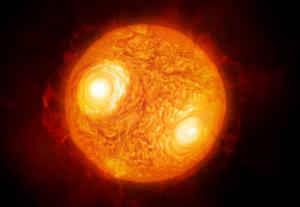 Antares, one of the biggest stars in our region of the galaxy, shows giant bright splotches in this artist's concept, which is based on observations made from the European Southern Observatory. Each of the splotches, which is much hotter than the surrounding surface, is many times bigger than the Sun. They are massive blobs of hot gas dredged from deep beneath the star's surface. Antares is classified as a supergiant. It is many times more massive than the Sun, hundreds of times wider, and tens of thousands of times brighter. [ESO/M. Kornmesser]

The scorpion has a bit of a heart murmur. Over a period of several years, the star that represents its heart fades and brightens. That’s probably caused by changes in the size of the star — its diameter may vary by millions of miles.

Antares is one of the brightest stars in the night sky. It’s near the middle of the curved body of Scorpius, which is in the south-southeast at nightfall. Tonight, Antares is not far to the lower right of the almost-full Moon.

The star is one of the biggest and brightest in our region of the galaxy. If you combine all wavelengths of light, it shines tens of thousands of times brighter than the Sun.

But its brightness varies. At visible wavelengths, in fact, it’s been shown to vary by a factor of more than two, over a period of more than four years. But the exact period has been hard to pin down, with estimates varying by about a year and a half.

The change in brightness is caused by a change in the size of Antares — it pulses in and out like an irregularly beating heart. Gas around the core of Antares may get so hot that it expands, puffing up the star’s outer layers, making Antares bigger. Those layers then expand and cool, so they shrink, making Antares smaller.

The pulsations also may be driven by bubbles of hot gas that rise to the surface — some of them many times bigger than the Sun. Some bubbles may surge farther than others, helping drive the “murmur” in the heart of the scorpion.