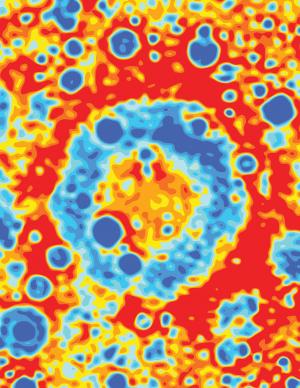 The Moon's gravity is lumpy, as shown in this false-color image of a large crater on the lunar surface. Red shows regions with a stronger gravitational pull, while red and yellow show regions with a weaker pull. The stronger gravity is caused by concentrations of denser rock at the surface. This lumpy gravitational field was discovered by orbiting spacecraft in the 1960s. [J.H. Melosh (Purdue)/NASA]

The Moon forms a wide, flat triangle with two bright lights tonight. The brilliant planet Jupiter is to the lower left of the Moon as night falls. At the same time, the star Spica, the leading light of Virgo, is a bit farther to the lower right of the Moon.

Over the past six decades, dozens of spacecraft have orbited the Moon. One of the first things they discovered is that the Moon’s gravity is “lumpy” — some parts of the Moon exert a stronger gravitational pull than others. That caused early probes to move up and down like horses on a merry-go-round as they orbited the Moon. They also crashed into the Moon much earlier than planned.

The “lumps” are known as mascons — mass concentrations. The material in these lumps is denser than the surrounding crust, so its gravitational pull is a bit stronger.

Most of the mascons are associated with “basins” — craters that are filled with volcanic rock. The impacts that carved the craters melted some of the lunar material. When the rock cooled, it was denser than the surrounding material, giving it a stronger gravitational pull.

Probes that measured lunar gravity found two sets of rings around many of the mascons. The inner rings are made of lighter material, so their gravitational pull is weak. And the outer rings contain piles of rock that was blasted out by the impacts that gouged the craters, so they have a stronger pull. Those rings help contribute to the Moon’s lumpy gravity.