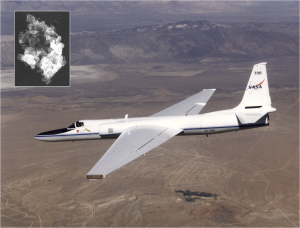 Most of us spend a fair amount of time trying to get rid of the dust in our homes. But some scientists at NASA spend time trying to catch dust. They use high-altitude aircraft to catch particles of dust that come from outside Earth’s atmosphere.

Thousands of tons of cosmic dust enter the atmosphere every year. Most of the particles are grains from comets and asteroids. Collecting them reveals more about these big chunks of ice, rock, and metal. And since comets and asteroids are leftovers from the birth of the planets, the dust grains also reveal a lot about conditions in the early solar system.

So NASA has been flying dust collectors aboard two types of aircraft for more than 30 years — modified versions of a spy plane and a Korean War-era bomber. The craft reach the stratosphere — altitudes of 50,000 feet or higher. Even there, most of the particles they pick up come from Earth — bits of sand, pollen, volcanic ash, and others. But there’s enough space dust to make it worth the effort.

At high altitude, the aircraft deploy flat, round collectors that are coated with a sticky oil. They come in two sizes — as big as a saucer or a dinner plate. The big one catches 20 or so grains of cosmic dust per hour.

NASA scientists sort through thousands of particles to pick out the ones that came from beyond Earth. Other scientists from around the world can then study the dust grains — learning more about the solar system from its tiniest members.