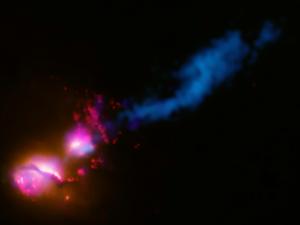 One galaxy is firing a "death ray" at a close companion in this multi-wavelength view of the system known as 3C 321. The larger galaxy, at lower right, is emitting a beam of charged particles from near a supermassive black hole at its center. The beam is passing across a companion galaxy, just to the upper right of the brighter one, then continuing millions of light-years into space (blue streak). The beam could damage the atmosphere of any planet in its path. This image combines visible light with X-rays and radio waves. [NASA/ESA/D. Evans (CfA)]

Any residents of a galaxy in the constellation Serpens have a big problem: They’re being blasted by a death ray from a black hole.

The galaxy is a companion to a larger galaxy, known as 3C321. They’re more than a billion light-years away.

A supermassive black hole inhabits the heart of the larger galaxy. It’s surrounded by a large disk of gas that’s heated to millions or billions of degrees. Powerful magnetic fields funnel charged particles from the disk into jets. They fire away from the poles of the black hole at almost the speed of light.

One of those jets is firing toward the companion galaxy, which is just 20,000 light-years away. Observations by telescopes on the ground and in space show that the jet is hitting the edge of the companion, creating a hotspot. The encounter deflects the beam off its original course, but it continues for hundreds of thousands of light-years.

The particles and radiation in the beam could destroy the ozone layer of any planet the beam hits. That would leave the planet exposed to radiation from the beam itself, and from other cosmic sources. So anything living on the planet would be in extreme danger.

And the situation is getting even worse. The smaller galaxy appears to be just entering the black-hole jet. Over time, more of the galaxy will pass across the jet — possibly exposing even more planets to the death ray from another galaxy.