Some of the most interesting objects in the constellation Ophiuchus look like dark holes in the sky. But they’re not holes at all. Instead, they’re immense clouds of cold gas and dust. They absorb the visible light of the stars that line up behind them, so they look almost black.

Several of these clouds group together to form the Pipe Nebula, which resembles a pipe. It has a “bowl” on the left, complete with curls of smoke, and a “stem” on the right.

Like most dark nebulae, the pipe appears to be giving birth to new stars — but not many. The only confirmed stellar embryos are found along a filament of gas in the stem. That suggests that the nebula is quite young, so it hasn’t had time to make many stars. That gives astronomers a chance to observe the very first steps in the birth of stars.

The little star formation that is going on may be triggered by a nearby group of young, massive stars. They blow strong winds that compress one of the clouds that make up the nebula. As the gas and dust smash closer together, they form clumps that collapse to make stars — bright offspring of a dark cloud.

And under especially dark skies, the Pipe Nebula is visible to the unaided eye. It climbs into good view in late evening, surrounded by the subtle band of the Milky Way. The nebula is between the bright planet Saturn, to its lower left, and the orange star Antares, a little closer in the opposite direction.

We’ll talk about another cloud tomorrow. 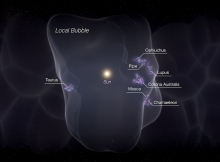 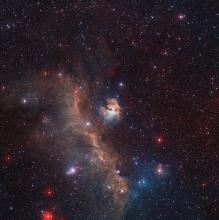