A star that astronomers first thought was an infant still in the embrace of its nursery turns out to be a near twin to the Sun — although one that’s billions of years younger.

The star is known by a long catalog number. It’s in the constellation Monoceros, the unicorn. The star appears in front of one of the unicorn’s best-known residents, the Rosette Nebula. It’s a beautiful cloud that’s given birth to a cluster of young stars. That position in the sky led astronomers to conclude that the solar twin was associated with the Rosette.

But observations with a telescope in Australia revealed that the star is only 715 light-years away. That’s about 4500 light-years closer than the Rosette.

The observations also revealed that the star has the same color and surface temperature as the Sun. That means it’s a member of the same spectral class, G2. Although it’s a bit smaller and fainter than the Sun, it’s almost exactly the same mass. That makes it a close enough match for the astronomers who studied the star to classify it as a solar twin.

One major difference, though, is age. Based on how fast the star spins and other factors, the astronomers concluded that the star is just 180 million years old, compared to 4.6 billion years for the Sun.

Studying solar twins at different stages of evolution helps astronomers better understand the history and future of the Sun. And that helps them devise better models of how all stars evolve. 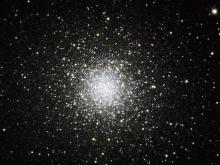