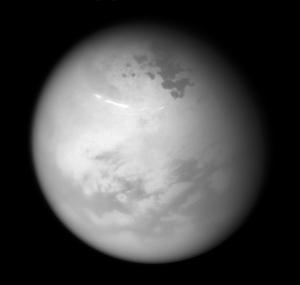 Bright ribbons of clouds and dark lakes and seas highlight the northern hemisphere of Titan, the largest moon of Saturn. The lakes and seas, at top, are filled with liquid ethane and methane, while the bright while clouds are made of the same compounds. Other features include dune fields and a possible ice volcano (small circle at bottom center). Although Titan is much colder than Earth, the seas, clouds, dune, and other features make it resemble our own world. The image was compiled from images snapped by Cassini, which peered through the clouds that hide the surface from view. [NASA/JPI/SSI]

The biggest moons of the biggest planets are some of the most remarkable worlds in the solar system. One of the moons of Jupiter, for example, is covered with giant volcanoes. And another Jovian moon may have a global ocean of liquid water beneath its icy crust.

The most remarkable moon of all, though, has to be Titan, the largest moon of Saturn. And what makes it remarkable is not that it looks exotic, but that it looks familiar. Riverbeds flow across its surface, emptying into lakes and seas. Clouds waft through the sky, occasionally dropping rain. And giant dunes undulate across its mid-section. In other words, it looks a lot like Earth.

And in some ways it may resemble the Earth of billions of years ago. The main thing they have in common is that Titan has a thick atmosphere that’s rich in organic compounds — the building blocks for life.

There’s one big difference between Earth and Titan, though: temperature. Titan is so cold that water is frozen as hard as granite. So the liquids that form the clouds, carve the rivers, and fill the lakes are ethane and methane. Even so, in many ways Titan is the most Earth-like world in the solar system — a familiar landscape that makes it a remarkable world.

Saturn is in good view the next couple of nights. The planet looks like a bright star, and stands to the lower left of the Moon as they climb into view late tonight. It will stand closer to the right of the Moon tomorrow night.