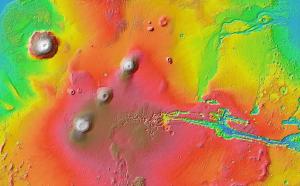 High and Low on Mars

A color-coded map shows the Tharsis region of Mars, home to the planet's largest volcanoes and deepest canyon. Red and brown represent the highest elevations, while green and blue are the lowest. This view encompasses Olympus Mons, at top left, the largest volcano on Mars. To its lower right are the three peaks known as Tharsis Montes. From lower left, they are Arsia, Pavonis, and Ascraeus Mons. A series of canyons known as Valles Marineris stretch across the right of the image, cutting deep into the landscape. Valles Marineris is many times longer, wider, and deeper than the Grand Canyon. [NASA/JPL/Arizona State]

If Mars colonists want to look for adventure, they’ll probably visit Tharsis Ridge. It’s a vast plateau of volcanic rock with some of the most spectacular features on the planet. Giant volcanoes loom at one side of the ridge, with canyons that dwarf the Grand Canyon on the other.

The ridge is several thousand miles across, and bulges several miles higher than the planet’s average elevation. It built up at least 3.7 billion years ago, when a massive pool of molten rock pushed upward from deep below the surface. “Hotspots” within the molten rock built giant volcanoes.

The most prominent of these volcanoes are known as Arsia Mons, Pavonis Mons, and Ascraeus Mons. They rise almost 10 miles high, and their bases are up to 300 miles across.

The biggest volcano on Earth is Mauna Loa, in Hawaii. It’s only 75 miles across and six miles tall. The difference is the way the crusts of the two planets are made. Earth’s crust consists of interlocking plates, which are in constant motion. They move across the pools of molten rock that build volcanoes. So over time, one volcano shuts down and another takes its place. Mars’s crust, on the other hand, is a solid sheet, so the volcanoes keep building in the same spot.

On the opposite side of the ridge is Valles Marineris. It’s a system of canyons that’s more than 2500 miles long, up to 375 miles wide, and six miles deep — another amazing landmark on Tharsis Ridge.