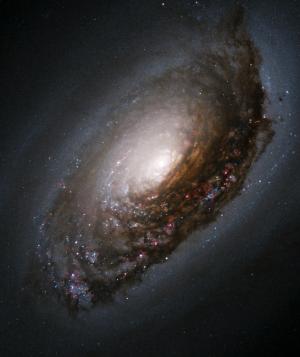 A band of dark dust has earned the spiral galaxy M64 a nickname: the Black-Eye galaxy. The band is clearly visible in this close-up of the center of M64, snapped by Hubble Space Telescope. Research suggests the dark dust is left over from a smaller galaxy that M64 incorporated into its own disk. The galaxy is in the constellation Coma Berenices. [NASA/Hubble Heritage Team (AURA/STScI)]

A beautiful spiral galaxy in the constellation Coma Berenices has a black eye. And it may have the same cause as when a person gets a black eye: the galaxy ran into something else.

The galaxy is M64. It’s smaller than our own galaxy, the Milky Way, and it has fewer stars. But it’s well known because it has a prominent dark band below its nucleus. That gives M64 a couple of nicknames: the Black-Eye or the Evil-Eye galaxy.

The dark spot consists of dust grains, which block the light of the stars that are behind them. About 25 years ago, astronomers discovered that the lane of dust is rotating in the opposite direction from the stars and gas in the center of the galaxy. The dust probably is the residue from a smaller galaxy that collided with M64.

Where the oppositely spinning regions rub against each other, they squeeze clouds of gas and dust. The clouds break into smaller blobs, which collapse to give birth to new stars. Hubble Space Telescope has photographed many stellar nurseries in the galaxy. It’s also seen many hot, brilliant young stars, which shine bright blue.

These stars live short lives — no more than a few tens of millions of years. And since M64 is at least 17 million light-years away, we see it as it looked at least 17 million years ago. So many of those bright blue stars have already blasted themselves to bits as supernovae — temporary blemishes for the Black-Eye galaxy.